We’ve had a terrible year, the coach has been sacked, confidence is down, there’s been injuries through the squad and we’re battling.

And you should never get beaten by 50 points in an NRL game no matter what team you put out there.

We’re copping it from all sides, but if I listened to random people on the internet, or what they’re saying on the NRL TV shows, then I wouldn’t be playing footy.

The other week they released some of our salaries on NRL360. That was wrong. You can speculate what players are on but they put it right there – ‘these eight players are taking up the cap’ – and they used it to attack Ash Taylor and Ryan James.

Ryan has done his ACL and is out for the year. It’s not his fault he’s injured.

They were attacking Ash for his form. They probably believe that is warranted for how he’s playing, but he’s going through a mental issue as well.

You can’t really kick a kid much more. He’s already down, not playing well, taking leave from the game for mental reasons, and they’re just spraying him on TV. Let it go a bit.

I get that it’s a results business. And if players are paid well and not performing, we understand the criticism that comes with that. 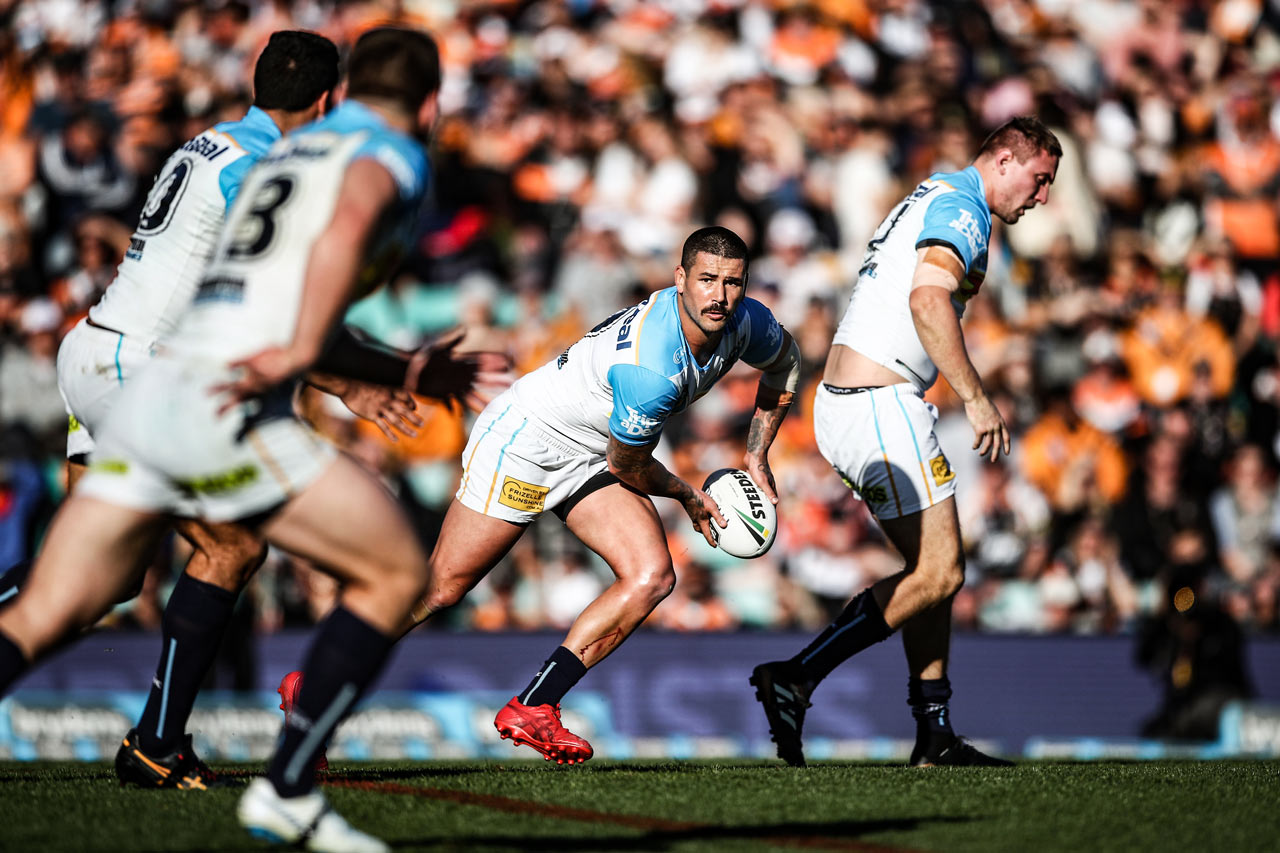 Then there’s the public. There are so many keyboard warriors out there right now.

I’ve been off social media for a few weeks. Not because I get affected by what people say, but I knew that when the coach got sacked, people were going to start attacking players.

I signed on a few days ago to put up a post for my partner, Jade, and some of the replies were really off. It’s funny how tough people can be when they’re hiding behind their phones.

Everyone is entitled to an opinion. But people are being smart-arses. It’s like people writing on the posts of an actor who has done a movie they don’t like, ‘That movie you starred in was shit’. I guess I just don’t see what people get out of that.

You can’t really kick a kid much more. He’s already down, not playing well, taking leave from the game for mental reasons, and they’re just spraying him on TV. Let it go a bit.

Sometimes I give it back and they fold straightaway: ‘Ah, no mate, I wasn’t being serious’. I invite them to come and see me at training. They never do.

It can be really damaging. Young players like Ash really struggle with that kind of stuff. He takes it to heart, for sure.

On a personal level, I feel the attacks have gotten worse this season. In 2016, when I first moved here, we were playing good footy and made the finals and the next year, although we didn’t go so well as a team, I played Origin footy and was in career-best form.

But the last two years my form hasn’t been at that level and the club hasn’t been going well. So I’ve copped it.

Jade is sweet with it. We’re down-to-earth people, so we’re okay. And attacking me is fine, but when they go on my partner’s Instagram and put insults on a family photo, that really pisses me off.

For me, that’s crossing the line.

THE MOOD SWINGS ARE TOUGH

The women in rugby league, the partners and the mums, are most of the boys’ rocks. A lot of them have been brought up just by their mums.

Our partners are at home riding the rollercoaster with us. They’re the ones who get us through.

I’ve been playing footy for nine years and had nine surgeries. Jade has been there for eight of them.

That’s what people don’t see. They see you on social media being funny or playing footy, getting good money, but they don’t see the other side of it, what you’re going through when you get smashed up and you need surgery.

I know we get a lot of money, and it can be hard for people to relate. ‘Why are you whinging if you’re getting six figures and you’re sitting at home injured?’

I would do anything to play footy. Money is important but playing footy is what you want to do.

When you get injured it’s crushing, and my partner has been through that, thick and thin.

When you’re in a sling for six weeks she’s washing you, dressing you. When you’re doing ACL recovery, she’s making sure your cuts don’t get infected, helping you in the shower, looking after the two kids at the same time.

5 years has flown with my best friend. 2 footy teams, 2 states, moved houses 7 times and most importantly 2 beautiful children. My ride or die. Love you, happy anniversary

Then there’s dealing with the mood swings. You’ll come home from training in a shit mood sometimes. You’ve been in there and all the boys are laughing and getting ready for a game and you struggle to stay upbeat.

I’ve been playing footy since I was six years old and when that gets taken away from you through injury, you face massive demons. The mood swings are tough.

In 2013, I was playing for Souths under Michael Maguire. I was in and out of first grade, single, living on my own and for a little while all I did was take sleeping pills and sit at home being depressed. 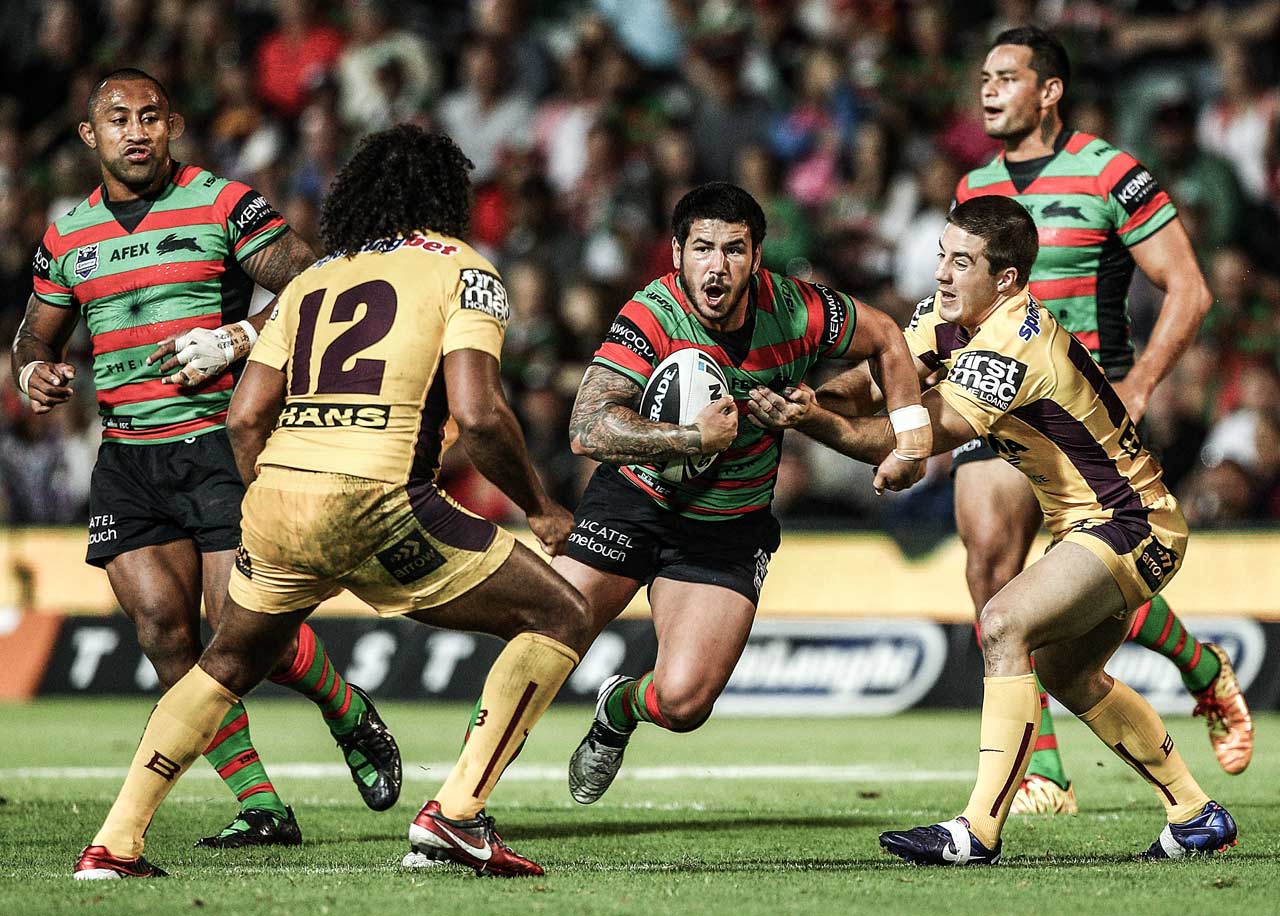 Some of the shit that players go through; form lapses and injuries and some blokes just get so down on themselves. That’s why some don’t bounce back quickly – they don’t have that support around them. In the end, I was just lucky I had someone.

I was coming home, being stupid, being alone, not wanting to talk to anyone. It was my way of dealing with getting dropped and not playing well.

I wasn’t on sleeping pills all the time but I’d play on the weekend, go home and mellow out, eat chips and ice cream. I’d go for a beer, just one or two, and end up not remembering the night. It’s so dangerous.

That was when I was single, of course. I’d never do that now with Jade and my kids. 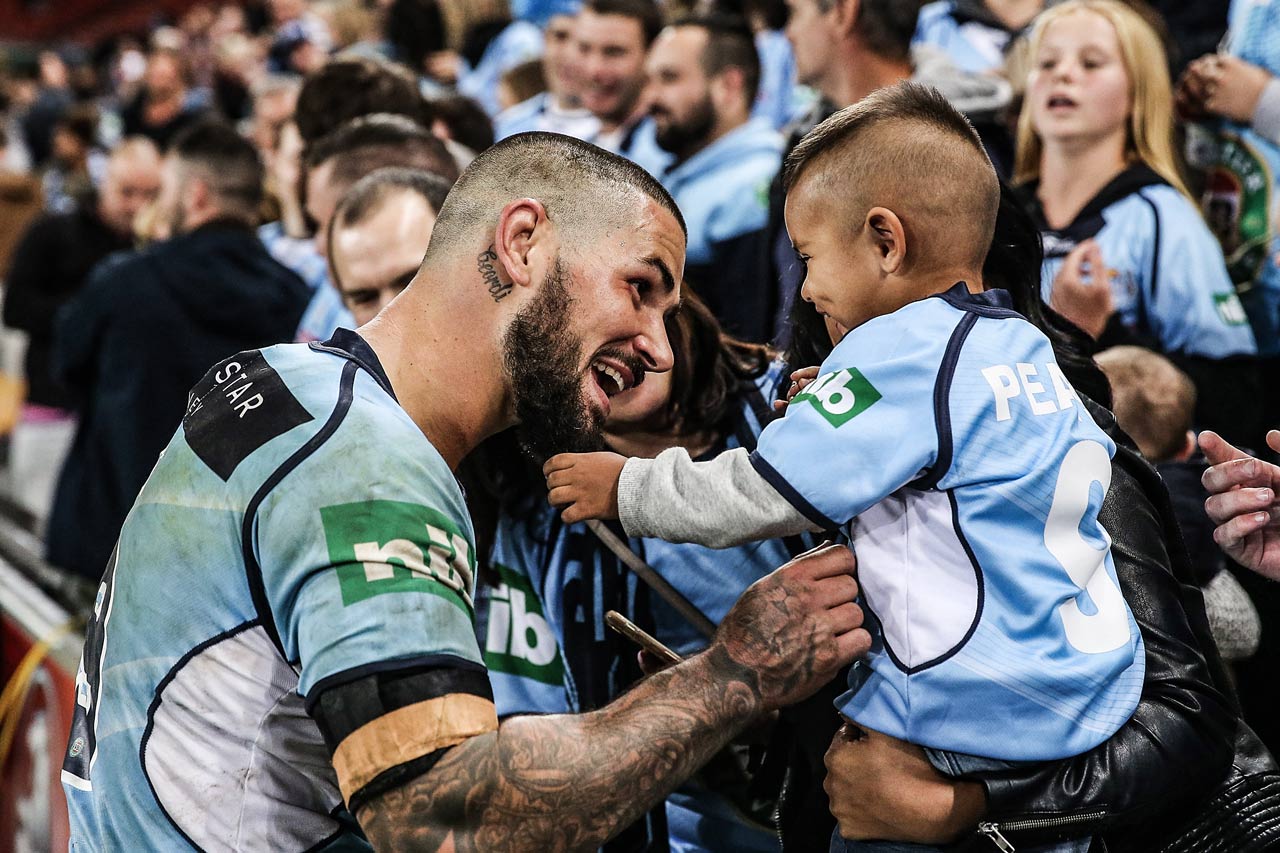 I CAME FROM THE HOUSING COMMISSION

There are always challenges for young blokes in this sport. I had mine too. And I think what’s happening with Ash right now is a wider issue with where the game is at.

I’m not saying all players need to go to reserve grade to make them appreciate what they’ve got, but it’s a place where you can go back and work on your game.

Some of these boys are on massive coin, play three or four good years of first grade and then they have a few bad games, get dropped and start saying they hate life and don’t want to do it anymore because it’s the first time they’ve experienced it.

When they go back to reserve grade, the shit hits the fan, they don’t know how to handle the pressure, and they start to hate life. 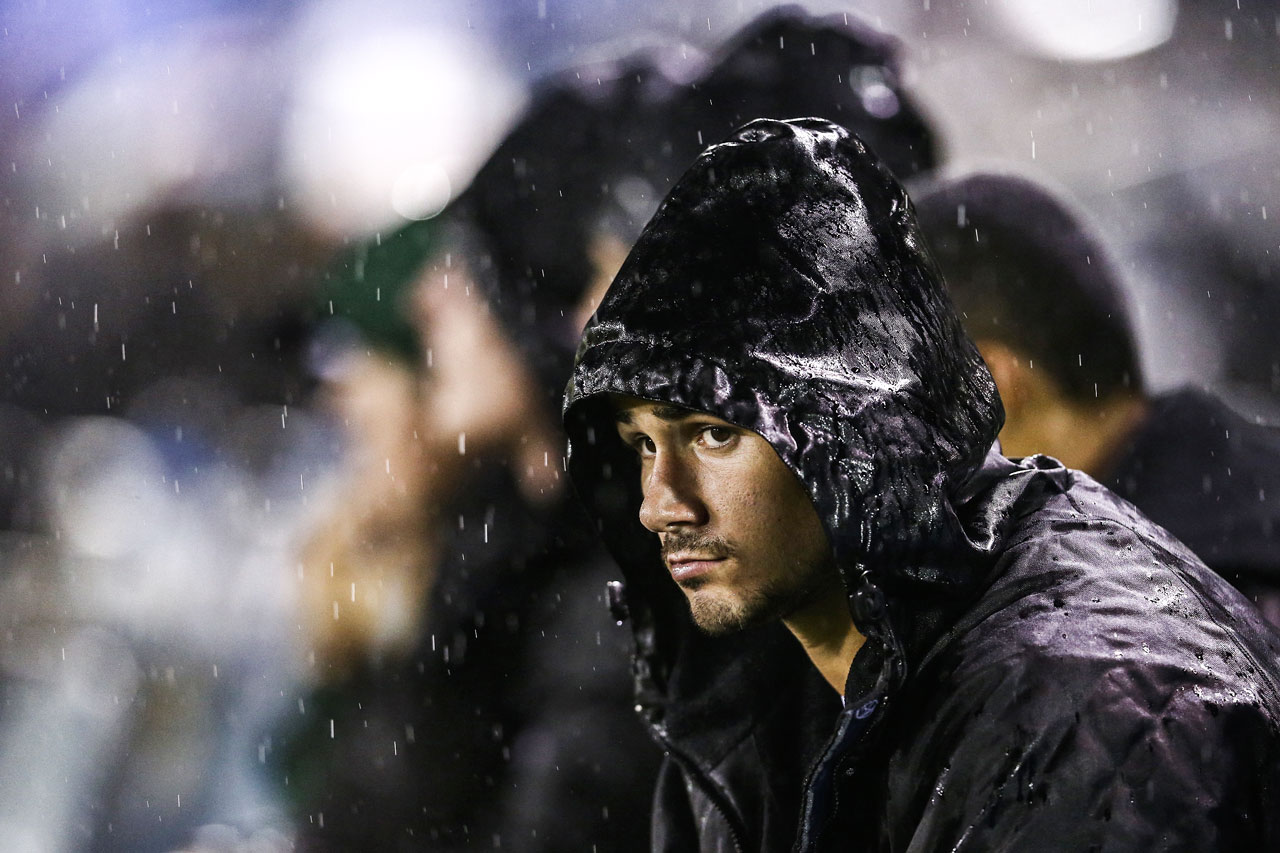 More can be done to help players manage money better. You get a day off when you’re single and 20 years old and what are you going to do? Plenty go to the pokies or the TAB and slap their money down.

There are some guys my age, been playing first grade for years, and they haven’t even bought a unit yet.

I wasn’t on sleeping pills all the time but I’d play on the weekend, go home and mellow out, eat chips and ice cream. I’d go for a beer, just one or two, and end up not remembering the night.

I came from nothing. Grew up in housing commission with my mum Pam. My old man Geordie played for the Bulldogs and Rabbitohs and lived nearby. He taught me what to do with money.

I remember when I first started earning I used to bring it home and shove it under my mattress. But my second year of first grade I saved my arse off and bought my first place.

That was my goal. Some don’t have that, and I think more should be done in the game, not just around gambling awareness but how negative gearing works, how investment properties work. Helping young players set goals. Some of these blokes who come in just spend their money so easily.

The post When they’re lining up to smash you appeared first on AthletesVoice.

Source: Players Voice
When they’re lining up to smash you

Podcast: Fergo and The Freak – Episode 358 – France Takes On England, Luke Brooks Not Going Anywhere, And Whats In A Name?

Five Players The Dolphins Should Target For 2023

Podcast: Fergo and The Freak – Episode 358 – France Takes On England, Luke Brooks Not Going Anywhere, And Whats In A Name?